Part 4: How Did 2 Ducks End Up Living In A Townhouse? 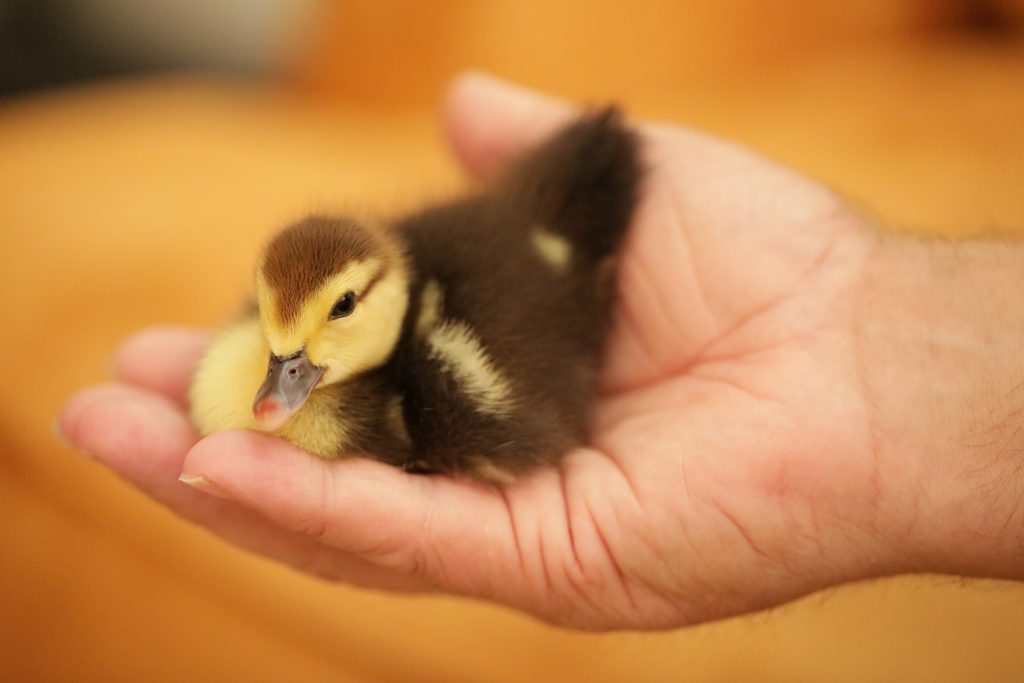 Gabby was tiny when he came to live with us!

Around 8 p.m. on January 16, 2018, I got an email from Q’s veterinarian. The animal hospital had a Muscovy duckling with no place to go. Did we want another duck? Heck, yeah ! I arranged to pick up the duckling the next evening. Q was going to have a Muscovy friend after all!

It was too early to disclose this good news to my husband. He had welcomed Q into our home and accepted our strange new family, but I suspected he might not share my enthusiasm for yet another wild creature. Better to wait on that. I told Bob I had to run an errand and headed to the animal hospital.

At check-in, I was nervous. Q had been nearly grown when we brought him home. “Duckling” could mean a wide range for a duck. How little would this little one be? The front desk manager went to a back room for ten minutes, and returned with a small, pencil-holed cardboard box. Ok, then. When I say small, think of a packet of Post-It notes  – the box was about 6x6x6 inches. Could we open it and take a look?

It was love at first sight with The Gabbster.

As the top flaps of the box were pulled apart, I peeked inside. There was a tiny, fluffy, yellow-and-brown duckling peering up, peeping at us. He (though we wouldn’t find his gender out until later) had that singular brown stripe extending behind each eye letting us know he was a “’Scovy.” He was, in a word, irresistible.

We reviewed his paperwork: the duckling was brought in for a possible leg injury. The hospital had observed him for a couple of days but couldn’t find anything wrong. And here was the kicker: the uninjured duckling couldn’t go back to his family because Florida law prohibited it. If the hospital couldn’t find a human caretaker, he would be euthanized. There weren’t any local animal rescues taking Muscovies at that time. Tonight, this little one was being released to me in exchange for a quick signature and a thank you.

Forty minutes later, we arrived home and it was time for the big reveal: “Hey Bob, you’ll never guess… look what I brought!” Diogi met me at the front door, as dictated by canine greeting protocol, and wanted to see exactly what was in that box. Bob came over and I popped the lid. Peeping. Cuteness. Excited dog jumping up to see. Not-so-excited husband. Another duck?

The why part of the explanation was followed by the where and the what the heck were we going to do with him. We had a baby play pen in the living room for Q while we were getting Diogi used to being alone with him. Q was on the couch in his bed box watching us. I put a clean doggy pee pad at the bottom of the empty pen and placed the little duckling inside. Immediately he started running around, testing his escape plan. We watched, stunned , as he climbed up the pen wall and jumped onto the living room carpet. I blocked our excited dog and scooped up the baby duck . This tot was crazy nimble, like Spiderman. He would most definitely not be contained in that pen. 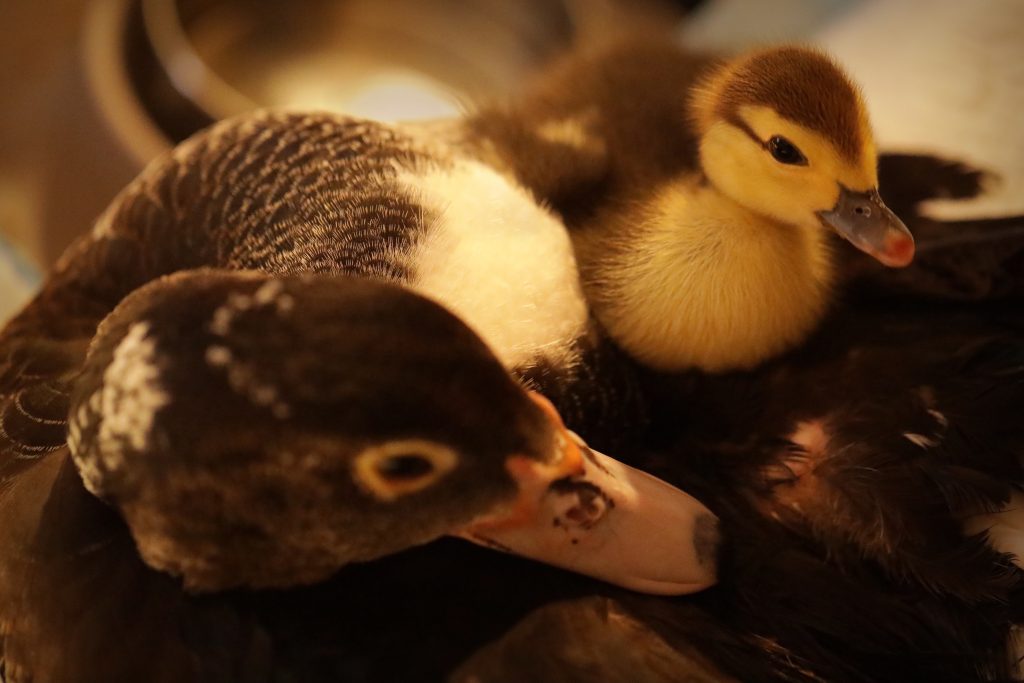 Q was wary of Gabby at first…

What to do now? I could make a night pen for him in the bathtub. He couldn’t climb the tub walls. I safety-proofed the tub by closing and blocking the drain, made a bed out of pine shavings at one end, and left little dishes of food and water at the other. Night light. Door closed. Peeping. Louder peeping the farther I got from the bathroom. We waited for him to finally go to sleep.

Imprinting happens quickly. The next morning, I was already his new Mom. I found I would need to keep him close to me or the peeping alarm would go off. The farther away I was, the louder he got. And if he could get out of his enclosure, he would come find me. Once I spotted him running down the hall towards me as I was putting away laundry. Ducklings need the constant proximity of Mom. I had to make sure he had someone around during waking hours so he wouldn’t get stressed. Like all mothering, I soon learned duckling care is a 24-hour job.

But what about our resident duck? How would Q react to this new little tagalong? I decided it was time to try putting them together. Q was, after all, the reason I’d brought another duck into our home.  It was not exactly love at first sight. Q was annoyed for the first three days, pecking at the baby before I pulled him away.  But after those initial interactions , Q softened up and, much to our delight, they became the best of buddies. The little guy  would even sit on Q’s shoulder. (They once spent a day in my bathroom, and crapped up the whole floor… The looks on their faces when I opened the door said it all: They had the best day ever!) 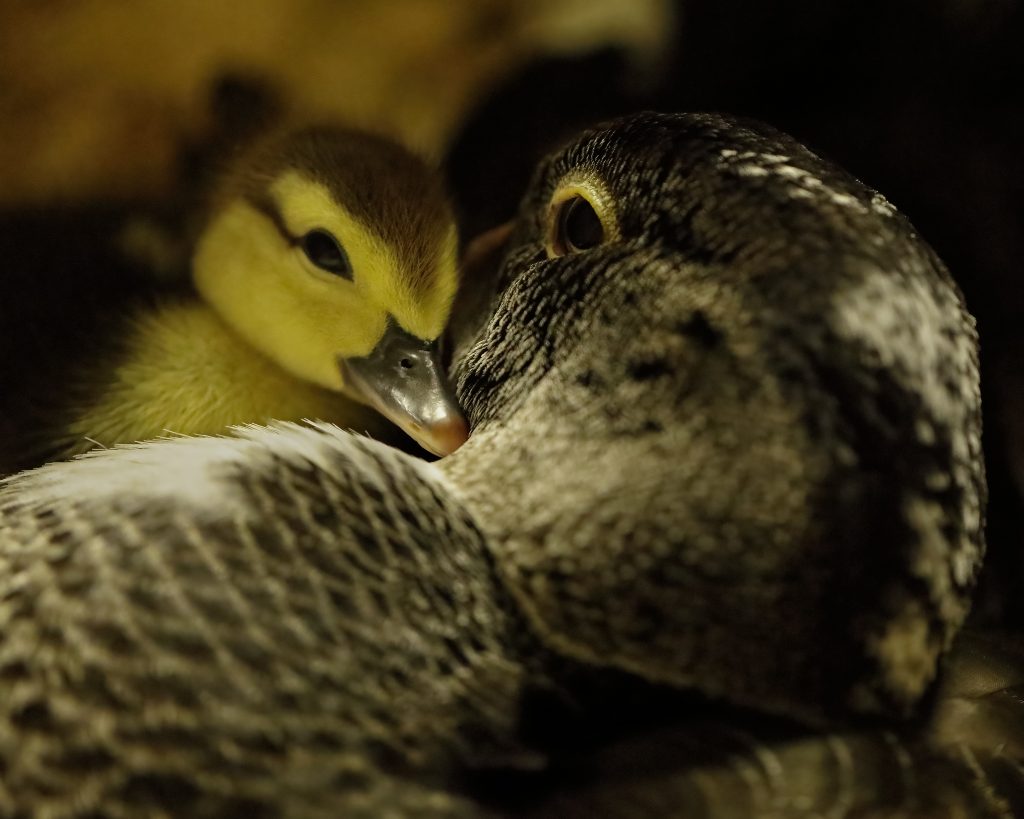 …but they soon became best friends.

Of course, we couldn’t just call him “the new duck .” It took a few days to come up with the right name. Bob and I tried a few ideas, but none of them really fit. (And no, I was not naming him Spidey.) Because he peeped or chattered almost all the time, my friend Deanna came up with a better moniker: Gabby. We didn’t know his  gender then, but once we figured out he was a boy, we started calling him Gabbs or The Gabbster.

In the end, Gabbs stole our hearts – just like Q and Diogi. And just like our dog and Q duck , Bob warmed up to Little Gabby too, even taking him on walks around the block. No regrets with these three kiddos!

That’s the story of how two ducks ended up living in a townhouse. But there are many more tales to tell. Keep an eye out for our blog posts and feel free to comment or ask questions! I would love to hear from you. Contact us here!